August 9, 2020 The Independent Tribune
In addition to working on the next novella, the author and founder of Hidden Treasure Novels has been busy writing a series of short stories. Vincent encourages writers in the regional 'tribe' and beyond to share their stories. Here is one that was published today in a regional newspaper. Enjoy the read. 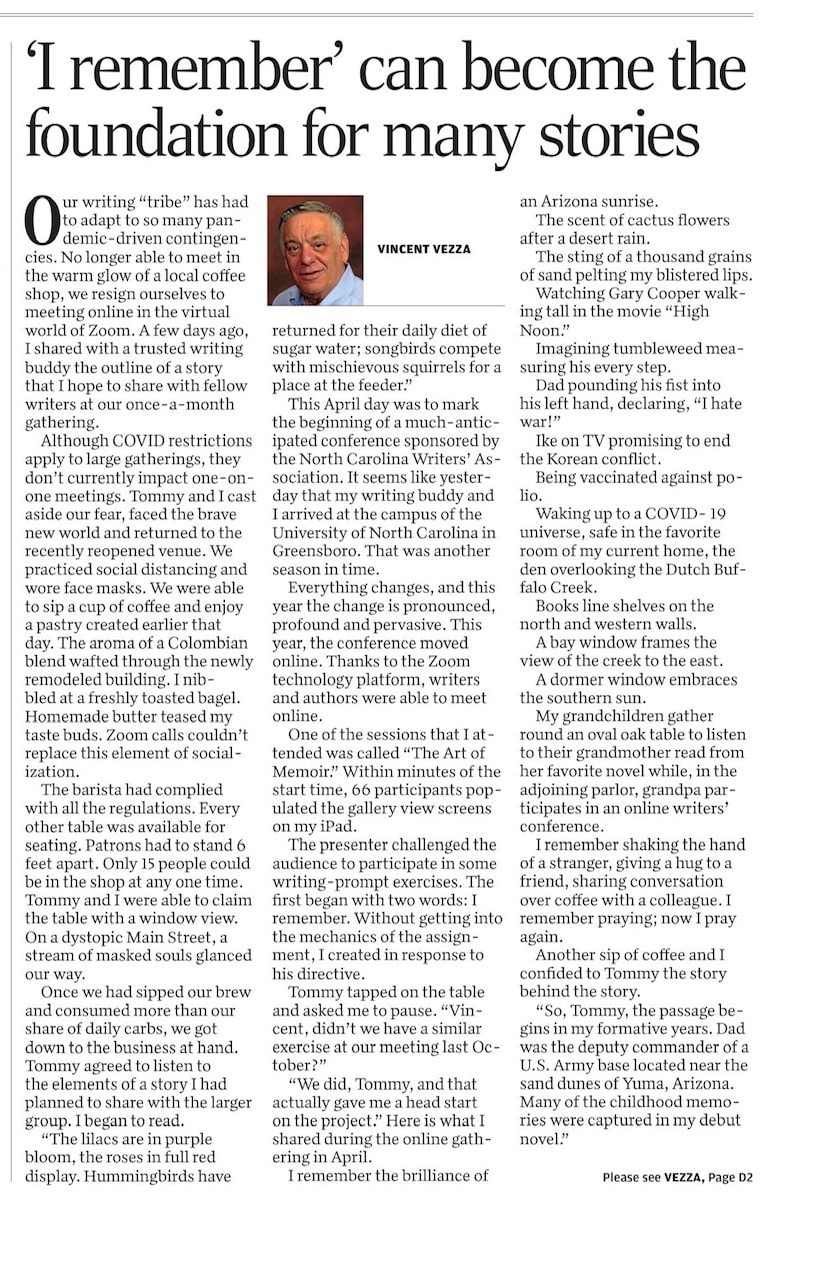 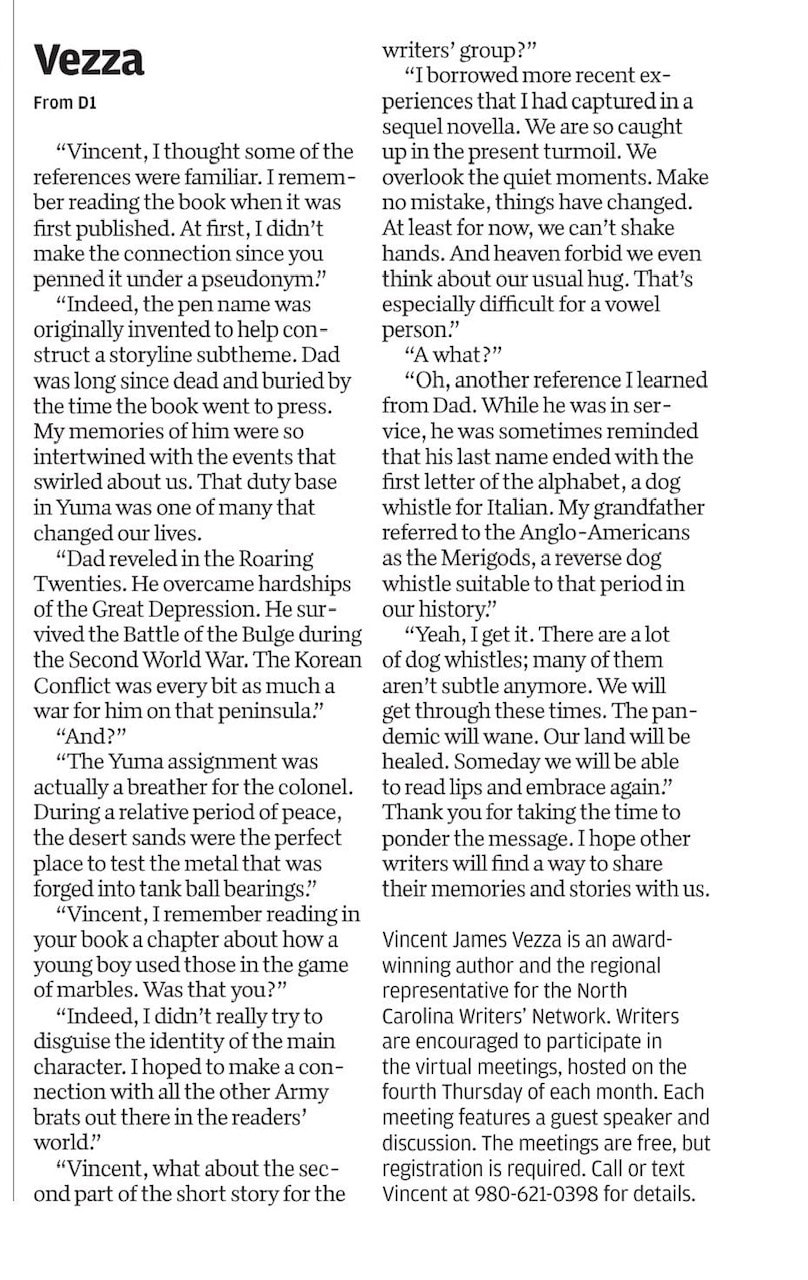 Read online
Hidden Treasure Novels has expanded our news section. It now includes information that features other authors from the HTN imprint and beyond.

In this time of COVID 19 Virus restrictions, most author events have migrated to an on-line format. Many of our authors are also guest speakers at the North Carolina Writers' Network meetings.

The featured author at the Cabarrus/Rowan Writers Night Out March meeting is Chuck Thurston. His books appear in the "Recommended" tab of this Hidden Treasure Novels website.

Chuck is also a frequent contributor to the Trail Tales Column that appears in the Senior Savvy regional newspaper. Access to his Trail Tales stories is available in the "Blog" tab of this site. 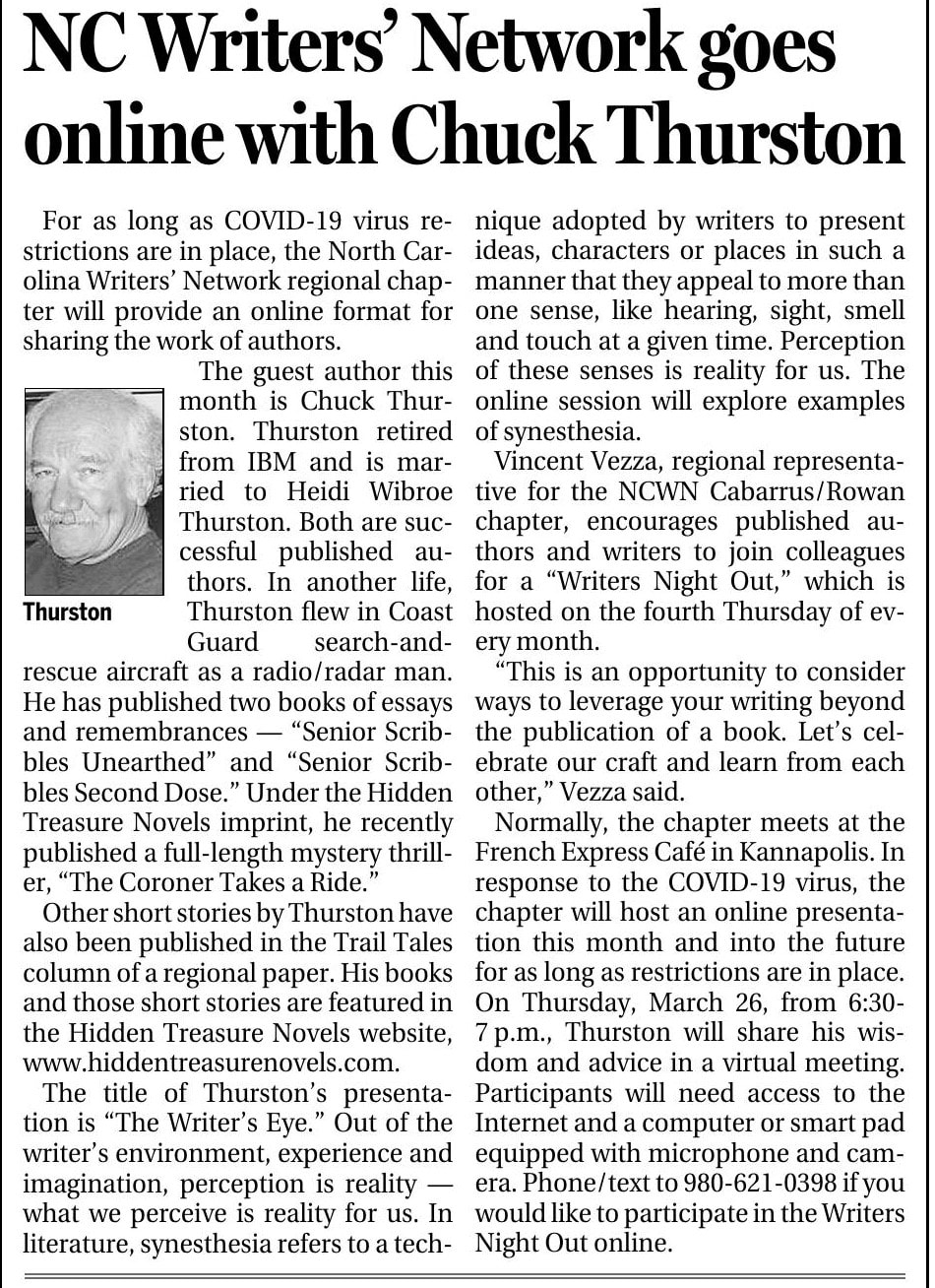 Hidden Treasure Novels has expanded our news section. We will include information that features other authors from the HTN imprint and beyond.

We anticipate that many of them will participate in a monthly writer's meeting hosted by the regional chapter of the North Carolina Writers' Network.

More information about that meeting can be acquired at the blog on the HTN website, reference Writers Night Out.

This month we were pleased to highlight the work of author M.J. Simms-Maddox. More information about her books and mission is captured in the story published in the Independent Tribune article featured on this page.
Read On-line

The Salisbury Post story about Neverborn sets the stage for a book signing in that town.
Read On-line
April 27, 2018  The Independent Tribune
The Independent Tribune reported the launch event of  Neverborn, a novella sequel to award winning novel, The Hidden Treasure of Dutch Buffalo Creek. Both books were published under the pseudonym of Jackson Badgenoone.
Independent Tribune article
April 2, 2018  Cabarrus Magazine
View Event 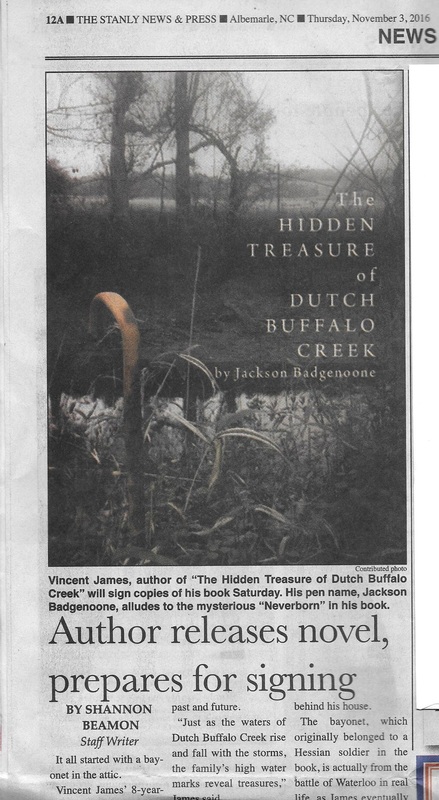 To view full story click on this button
Sunday, October 2, 2016 edition of the Salisbury Post (Books Section)
Book by Cabarrus County author named by the Independent Book Publishing Professionals Group as one of the best indie books of 2016


Staff report
"The Hidden Treasure of Dutch Buffalo Creek," by Cabarrus County author Vincent James Vezza  -- writing under the pen name of Jackson Badgenoone — has been named by the Independent Book Publishing Professionals Group as one of the best indie books of 2016, according to a press release.

Vezza’s book is a finalist in the Fiction Novel category in the 2016 Next Generation Indie Book Awards, the world’s largest not-for-profit book awards program for independent publishers and self-published authors.

The awards are judged by leaders of the indie book publishing industry, including many coming from long-standing careers with major publishing houses, to identify books that deserve to reach a wide audience.

“Our awards program is known as the ‘Sundance’ of the book publishing world,” says Catherine Goulet, chair of the 2016 Next Generation Indie Book Awards program.

In an article at CNN.com titled "If it's cool, creative, and different, it's indie," journalist Catherine Andrews wrote: "The term 'indie' traditionally refers to independent art – music, film, literature or anything that fits under the broad banner of culture – created outside of the mainstream and without corporate financing."

“Like other independent artists, many indie book publishers face challenges that the industry giants don't experience,”  Goulet said. “The indies have to work much harder to get their best books into readers’ hands.”

According to Bowker’s Books in Print database, more than 2.3 million books were published or distributed in the United States alone in 2012, the most recent year for which complete figures are available. A majority of these — more than 2 million books — were “non-traditionally” published, including print on demand and self-published titles.

“Authors and publishers who compete in the Next Generation Indie Book Awards are serious about promoting their books,” Goulet said. “They aim to stand out from the crowd of millions of books in print.”

Here is the synopsis for “The Hidden Treasure of Dutch Buffalo Creek”: An eight year old boy named James, aka the wannabe Cisco Kid, nearly lost his life as he searched for precious metal in a bone dry southwest Arizona gulley. He retrieved only pyrite before a desert flood swept away his world.
Over the course of half a century James acquired several additional nicknames. They were reflections of his multiple personalities. His dad called him Traveler or Trav. Some coworkers referred to him as Point Man. A few colleagues labeled him Knowledge Navigator or Nav.
Under the cool, shimmering waters of Dutch Buffalo Creek, in 2014 A.D., Trav came upon a rusty bayonet. It was buried long ago in the Carolina Piedmont. This discovery is no coincidence; indeed, this bayonet is a symbol of the abundant riches found in the river of history that connects both the past and future.
The blade reminded Point Man that all that glitters is not gold. Nav expanded the search for real treasure beyond the water’s edge. The blade was a catalyst that drove James to sift through a lifetime of artifacts and bittersweet memories. He found riches from the past and caught a glimpse of the future. Just as the bayonet glimmered in the depths of the water, so does the ongoing work of his family’s unseen witnesses, the Neverborn.
They reveal ancient treasures that go far beyond mere gold and silver. James is guided into a deeper understanding that he and countless loved ones have been called by name as spoken by the prophet Isaiah: I have summoned you by name; you are mine. When you pass through the waters, I will be with you.
Your search for real treasure begins when you realize that you are called by name. You are special in the eyes of your Creator. Your spiritual wealth will overcome all of the conflict and competition that troubles the waters in your life.